Peter Spragg was born in Manchester, England in 1954. After graduating from college, he joined the merchant navy as a radio/electronics officer and worked for CP Ships. In this role he had the opportunity to travel the world. Peter met his wife Gill in England and they were married in 1976. They have four children, who are now all married, and they have 14 grandchildren. Both Peter and Gill became Christians in 1979. They had been going through a struggle in their marriage and God used that to lead them to salvation. They emigrated to Canada in 1980, along with their daughter Nicola, who was two years old at the time.  Since the merchant navy days, Peter has worked as an electronics foreman for the Iron Ore Company of Canada and as a salesman of electronic test equipment, prior to going to Bible college in 1983.  They were originally thinking of becoming missionaries, but God had other ideas, and after graduating from Bible college Peter became the pastor of Bloomfield Standard Church, where he served for seven years.

Peter and Gill left that church to focus on raising their family. He started a publishing business, but remained very involved in youth ministry and leading Bible studies.  In 2004, God called Peter to Emmanuel Baptist Church, and he became pastor here in December of that year.  "It has been amazing to be involved in the ministry here at Emmanuel," says Peter.  "God has blessed us with a tremendous group of people who want to be used by God in bringing the message of salvation to Prince Edward County and beyond." Contact Pastor Peter @ peter@emmanuellife.com

Shawn was born in Toronto, Ontario and raised in Foster Care from the age of 3. At age 13 he came to know the Lord at Cobourg Fellowship Baptist Church and was soon baptized. After graduating from Emmanuel Bible College in 1997, he was married to Sarah and went into full time Ministry. He served for 4 years as a Youth Pastor at Wheatley Baptist Church, in Wheatley, Ontario followed by 10 years as the Pastor of Youth and Young Families at Shenstone Baptist Church in Brantford, Ontario. Shawn and Sarah came to Emmanuel in April 2017 with their four Kids: Kayla, Micah, Emma & Paul. You can contact Pastor Shawn at shawn@emmanuellife.com

Dan is a County boy who has a heart to see God’s people sing His praises and to see student’s faith come to life. Dan and his wife, Julie, have four children. He is currently working on his Master of Divinity through Northwest Baptist Seminary. You can contact Pastor Dan @ dan@emmanuellife.com

Rachel Conley is a true County girl. She was born here, grew up as a dairy farmer's daughter working hard on the family farm and feels so blessed to continue to call the County her home. Rachel gave her heart to the Lord in her teen years when a cute looking guy at school talked to her about Jesus. Years later she married that guy (Ken) and they now have 4 wonderful kids.  As a family they have attended Emmanuel since 2008. Before her kids were born Rachel worked as a Registered Practical Nurse in long term care. She loves caring for people and her role as Congregational Care Director allows her the privilege of visiting the Congregation, caring for their needs and helping them connect to others within the church community. Currently she is finishing her Certificate in Christian Ministry through Eternity Bible College. You can contact Rachel, @ conleyfamily1998@gmail.com)

Doreen Kuipers, a true country girl, was born and raised in a remote ranching community (Pink Mountain) on the edge of the Rocky Mountains in Northern British Columbia. She committed her life to the Lord at a young age and was water baptized at age 10 and has continued to grow in her Christian Faith/ Walk with God ever since. After meeting and falling in love with a PEC local county boy (Jasen Kuipers) Doreen moved here, got married, and has called The County home for the past 17 years, (and they have called Emmanuel home for the past 9 years) Together, her and Jasen work on the Kuiperscrest Holstein dairy farm with their 3 kids (Meghan, Courtney, Jayden) and Jasen’s parents, and just last year won the esteemed Canadian title of Master Breeder Herd! Doreen has done online bookkeeping courses, and is gifted in administration, and enjoys being involved in the church community here at Emmanuel. You can contact Doreen, @ office@emmanuellife.com

Bob was born on a farm in Saskatchewan, the youngest of three boys. He attended Marriott Public School, Nutana Collegiate-High School (Saskatoon), University of Saskatchewan (BA), Pine Hill Divinity Hall (Halifax)(MDiv), and Tyndale University and Seminary (Toronto) (Counseling Major). Bob made a Commitment to Jesus in 1953 through Inter-Varsity Christian Fellowship and received a definite call of God to the ministry in 1959. He got Married to Mary Elizabeth Morrison in 1959, and has three Sons Brian, Blair, and Bradley and three Daughters in Law: Mona, Karen, and Julie. Bob has Grandchildren: Emily & Tyler (Soon to be married to Laura), Nicole(Ben), Madison. Bob was Ordained to ministry of the Word and Sacraments in 1961 through the United Church. He was involved in high school & university student work in Seoul, South Korea, and was the Pastor of congregations in Geogetown, Orangeville and St. Catharines. Bob has also ministered as a Christian Counselor at Crossroads Burlington, Belleville, Emmanuel Baptist Bloomfield, and was Staff Chaplain of QYFC. Bob has been an Elder at  Emmanuel  from 2013 to the present. Bob enjoys the fellowship of the church, preaching, teaching, counseling and mentoring. Bob is praying for revival in our land, a massive movement of the Holy Spirit.

Herman grew up as  county boy his whole life . Growing up on a dairy farm he realized the importance of good work, faithfulness, family and working together, After he completed his education at Highschool in Picton he began farming with his dad. Herman married Marianne and had six children, Marriane went to be with the Lord in 2022, and Herman remarried Heather.  They have a dairy farm in the County . Herman was raised in a Christian home which gave him a foundation for life. He received Christ as a child and later rededicated his life to Christ at a Billy Graham Crusade in Ottawa. Herman has attended Emmanuel for more than 30 years. He loves the church family which has been a real support to them. God is truly good and faithful

Ben was born and raised in Toronto.  As a teen he knew God and knew he was called to a life of serving the Lord.  He and his wife Heather met through a church teen group and eventually fell in love and married when they were 23.  They continued faithfully participating in the church they met in, had two children, Elise and Thomas, and decided to move to the County in 2006 where they started attending Emmanuel Baptist Church that summer.  It is at Emmanuel that the call on his life and service to the Lord became a joy when Ben started understanding how personal a savior Jesus really is.  Other than spending time with family, Ben enjoys sports of all kind and still plays on our Friday night softball team.... when he’s not injured from play the previous week.  Ben loves Jesus, and hopes to show that by loving God’s people and those who haven’t accepted Jesus yet. 1 John 4:9-11, .... the love of God was made manifest among us, that God sent his only Son into the world so that we might live through him.  In this love, not that we have loved God but that he loved us and sent his Son to be the propitiation for our sins.  Beloved, if God so loved us, we also ought to love one another.

Paul Robinson
I was raised in a Christian home which I left in 1967 for a machinist/industrial millwright apprenticeship at Stelco in Hamilton. During my apprenticeship I  met my wife Janice and shortly after our marriage in 1974 we returned to the county to raise our family. We adopted our son and daughter within one month of being approved by the Children’s Aid Society. At that time, it was extremely difficult to adopt babies and usually the wait time to adopt after approval was over one year. To this day we know that God had a hand in these wonderful events and placed these children in our home. Over the years God has led me to volunteer in several organizations which I have immensely enjoyed. This includes as a trainer with the Wellington Dukes Junior A hockey team for 17 years, I was on the board of the ROC centre which is an outreach program for teenagers in the Picton area, I have been a Chapel volunteer in the prison ministries at Joyceville, Workworth, Bath and Kingston penitentiaries for 15 years . Currently I am on the Emmanuel Baptist Church board of directors and also on the board of Lovesong which is currently converting a former public school into a Seniors affordable housing complex. I am also with Hockey Ministries International which provides Christian mentoring to the Wellington Dukes Hockey team. Scripture says, "For we are God’s workmanship, created in Christ Jesus to do good works, which God prepared in advance for us to do . (Eph. 2:10), 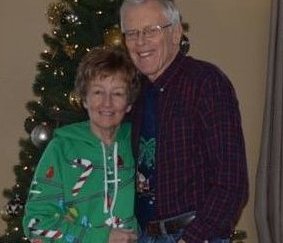 While at University in England, John came in contact with students who were associated with the International Christian Discipleship organization ‘The Navigators’ and became a Christian. Over the next four years he was helped to grow in Christ and received a solid grounding in practical discipleship. After graduating he joined the Navigator staff as a trainee and spent three years living in Vienna, Austria, learned German and traveled extensively behind the Iron Curtain working in a discipleship ministry with local churches. Back in England he met and married his wife, Anne, who had also become a Christian through a Navigator ministry. At this time, he was led to return to his engineering career with Roll-Royce (airplane engines not cars!).They were unable to have their own children and were blessed to be able to adopt Katie and David. They have always been involved in a local church of some kind and John served as an Elder in a Methodist Church. In 1997 they moved to Montreal and John began work in design and development with Rolls-Royce Canada. Anne has struggled with Lyme disease for 25 years and because of this and their move to Canada, she has not worked as a medical doctor since before they left England. John retired in 2011 and they moved to the amazing County in 2013; and they have been a part of Emmanuel Baptist Church since then, serving in various ways including in the Marriage Ministry. John was asked to become an Elder in late 2018 and took on the role of Treasurer. John has used his project management background to help the LoveSong Affordable Housing team and recently became a Board member and Treasurer.